A Few Notes on “Making Mystery: An Interview with Andrew Antoniou” 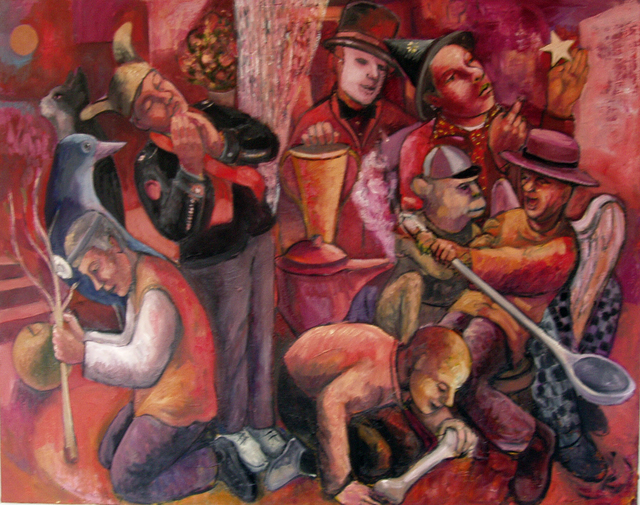 Note from Marco V: These comments refer to the interview by J.F. Martel published on Metapsychosis on April 28th, 2021. Readers may wish to read that interview and view the artworks first, then hop back to this piece to consider the (impromptu) reflections which I invited Brian, who co-reviewed the piece prior to publication, to make in response.

My dreams have become much more familiar to me these last few years. I have welcomed my dream world. Regardless of how horrific, confronting, or beautiful the dreams are, I see them as part of my makeup, not something alien, but something that I own in some way, but it is greater than my ownership as well. The language of dreams is something whose vocabulary I’m beginning to understand.

I Googled Antoniou’s paintings before I glanced at “Making Mystery,” and my first two thoughts were, “His space looks a lot like what Beckman was doing in the ‘20s and ‘30s. It seeks to be a kind of compressed, theatrical dream space, in which objects are no different from symbols, and even the strangest of events and juxtapositions somehow seem inevitable. Is that an angel wearing a top hat?” The correct response is simply, “Of course!” Then, starting the essay, I saw that the exhibit was called “Theatre of Dreams” and that the artist cites Beckman as an influence. What also immediately struck me, though, was how distinctively his own Antoniou’s paintings were, how he defines his originality in terms of a process of inclusion.

Many years ago, I did a few days of student teaching at an elite suburban junior high school called “Brimmer and May.” During the introduction to my art project, I asked students, “What are dreams?” Being the sons and daughters of affluent professionals, all repeated some version of Freud’s idea that dreams are are “tegesrest,” or “day residues”—recyclings of mundane events that allow us to process the emotions that they stir and translate our repressed wishes into some sort of symbolic form. I doubt that any of the students had read Freud yet, but all of them had somehow been imprinted with the theory. When individual students were asked to recount their dreams, however, only 40 to 60 percent of these seemed to correspond to the idea that the students had so confidently expressed. In their dreams, the students were not necessarily who they were, nor were they the same person from one moment to the next, nor were they always at the center of the action. Many symbols were not easy-to-translate substitutes for wishes. They had their own life. At best, they could mean many things at once, and partake of many worlds. At worst, they could be utterly opaque.

Each night, an ocean of mysterious events washes over us, and, for the most part, we don’t regard these as particularly important. We are so intimately close to this hidden part of ourselves, to the realm in which this part moves, yet we are also almost infinitely far away. Above all, Antoniou’s compressed, theatrical space could perhaps be read as a kind of ritual confrontation, in which the known and unknown, the diurnal and nocturnal, are forced to meet and mix on a stage that allows for no casual avoidance or escape.

Antoniou’s sense that dialogue is central to the creative process is very much something that I share. It is a process that begins and then begins again and then continues to begin, with each brushstroke changing the painting of which it is a part, with each word changing the essay or novel or poem, with the unknown constantly disrupting the fixed body of our knowledge, with the inanimate proving that it knows more than its saying, with the dead very loudly insisting that they are not so dead after all. In Antoniou’s crowded theatre space, each participant in the dialogue maintains his/her/its separate nature and integrity while, at the same time, entering a liminal zone in which all bets are off and familiar boundaries rearrange themselves by means of some occult logic. Antoniou, by surrendering himself, takes on some part of the power of his tutelary spirits, while such artists as Beckman, Blake, and Bosch discover that their realm of action has expanded, that their creative processes are still vital and unpredictable many years beyond their deaths.

On the stage arranged by Antoniou, the artist shares a few drams of Glenfiddich single malt in a three-hour late-night free-associative talk with Beckman. Schoenberg defers to Bach as the true inventor of the 12-tone method. Bach waxes nostalgic about his 300-mile walking trip to copy out the concertos of Vivaldi. Melville recites long passages from Milton and Shakespeare and the King James Bible. Blake kneels to kiss the gigantic foot of Michelangelo. Picasso wistfully recounts his gratitude at being introduced to Cezanne (while denying, of course, that “Demoiselles d’Avignon” owes anything at all to African sculpture).

When I first went to art school in 1974, I was nervous about figure drawing class because I had not drawn any figures in high school. Many of my classmates had gone to art school because they wanted to play at being artists—how many of them are still painting?—and most of us were obsessed with being as “original” as possible. One of the first things I noticed in figure drawing class, however, was that it is almost impossible not to be original, if only in some very minor way. The great majority of figures would end up looking like the artists who had drawn them. Tall, muscular artists would draw tall, muscular models. Small, frail-looking artists with long noses would draw small, frail-looking models with long noses. Heavy artists would always try to sneak another 10 to 20 pounds onto their models. Lest you assume this is simply a matter of inexperience, Beckman serves as a prime example of how skill is not the issue.

Originality, of whatever sort, does not necessarily involve a quest for ever more radical or reductive extremes. Rather, it depends upon the subtlety of the artist’s interaction with his subject(s), his willingness to take chances, to begin from the beginning and then step back even from that, and finally, his courage in following the peculiar twists and turns of his creative process to the end. So, when looking at Antoniou’s paintings, I note the allusions to such artists as Beckman, Nolde, (early) Guston, Munch, Kirchner, Blake, Palmer, Bosch, and many others. More importantly, though, I see and appreciate that I am being asked to pose questions to all included, to see Antoniou and all of his spirits from a multitude of angles.

I just get this great mercurial feeling about the self. It wears so many different costumes, so many different hats, and so many different masks that I don’t feel that centered self. There is just this space of activity of the selves. Not that it causes me any kind of instability. Like an orchestra conductor, I’m still in control of it in some way. It hasn’t gotten to the point where I lose all sense of self. But I can’t honestly say that I have any idea of an intrinsic, solo, individual self.

Over the past three weeks, I’ve been revising the 12 prose-poems in my book “Maps of the Metaphysical Double: In the Footprints of de Chirico.” In all these prose-poems—which could also be seen as dramatic monologues—I am speaking in the persona of proto-Surrealist painter and writer Giorgio de Chirico, which allows me to say certain strange and grandiose things that I would (probably) never say myself. Yet these are not in any way just literary exercises or simple imitations. Throughout what has turned out to be a labyrinthine process, I have felt that I was interacting less with de Chirico than with his daimon, with an atemporal being who, through the writing of these prose-poems, has become as much mine as de Chirico’s. This creates an altogether new reality, a new theatrical space, a voice that is neither de Chirico’s nor my own. Many masks and intersecting stage-sets are deployed. Here is the short poem that closes the book:

The Wheel of History

Blind mechanics drive the wheel of history. They are blind, and they do their best. The wheel turns. It turns, and it must turn, and it will continue to do so. The wheel turns, as it has from before the projection of the stage-set we inhabit, with its two-dimensional skyscrapers that appear to be so heavy, with its mummified steelworkers perched upon their girders. But why has all the sound been sucked out of the city, and why do the crowds not move? Why too is the sun so disconnected from its orbit? We know only what we desire for ourselves.

Rumor has it that our guides may preexist the wheel, or that they are, at worst, its voluntary victims. That may be, it may not. These guides say nothing as they disappear. Taking with them the vast records of their work, they withdraw beyond creation. The inventors of the Earth abandon us. They remove the masks they wear, as they march into the sea, to leave them on a pile of rotting fish heads by the docks. Drunk, a tribe invades the square with hammers, to break the nose from the statue of the patriarch. There are mysteries so dark that they should never come to light. Oh no, but then again, oh yes.

The scent of salt air, a bit like that of blood, moves inland from the sea. The night is clear and wide. It is very quiet. I begin to sense that a revolution has overthrown the Twelve, the architects of Thoth. I brood above nothing, a shadow carried across waves. Entering the black tunnel complex underneath a pyramid, I find, looking down, that my fingers touch the mask of Horus. His breath, warm on my hand, fades, as he struggles, as he has no strength to stand. The Younger Dryas is still wet behind the ears. The god weeps, as do I.

Yet again, the sky is clogged with the murder of a world. Birds flame and plummet next to technocratic discs. No girl can find her iron hoop. No cannon can find its artichokes. Orion has scrubbed the signatures from all but a few of my paintings. This is bad, very bad. Should I maybe have produced more copies of my copies? Auroral hieroglyphs now grow so stupid as to claim that I never wrote Hebdomeros, as if that were in some way a surprise, as if I had not countless times denied exclusive authorship. Few immortals are as humble. Has not my vision led me farther than I ever wanted to go? Have I not seen more than I was meant to understand? Here, I am done with my face. Please take it. It is yours.

I, de Chirico, friend to manikins, could not be more at peace. I have proved that no time has passed. I will do so once again. What, should I care that a deluge kisses Volos? I am not the jealous sort. To each coast: a catastrophe. There are more than enough waves to go around. Once more, the planets rhyme. How wonderful it is to speak with Nietzsche. He is less mad than before, of course. This will not do, it will not do at all. I will have to point out to him the error of his ways. My eyes are wider than Pangaea. Blue lava flows.