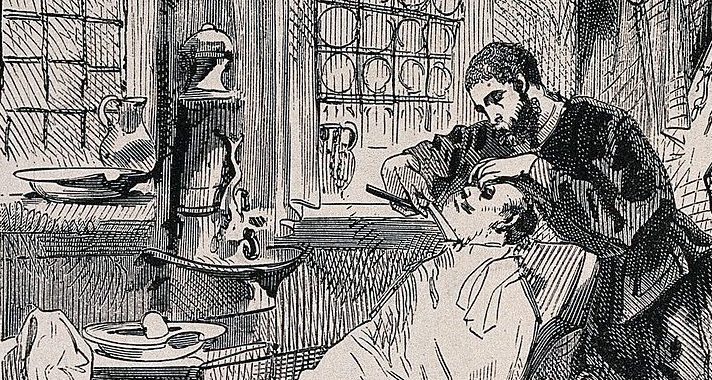 The Spiritual Barber had opened his salon a year earlier and it had been an instant success. Open Mondays to Saturdays, it attracted an ever-growing number of customers, who thought nothing of waiting several hours until it was their turn to be served. Men, young and old and from all walks of life, would pay over fifty euros for the barber to help them resolve their personal problems while cutting their hair or shaving them. Each session would last just as long as was needed for the customer to leave the salon feeling at peace with himself and pleased with his new appearance. The session over, once they had looked at themselves in the mirror, what they saw there was a new man. They left their problems, together with the scattered clippings of their hair, behind them on the salon floor and their worries mixed with the remnants of the shaving cream in the bowl in which the barber washed his razor. Only rarely did a customer leave without the feeling that his anguish had been brushed away. People came to call him The Spiritual Barber.

Where he originally came from was something of a mystery. It was said by some that he was a psychology graduate or that he had a master’s degree in philosophy, or even that he had once been a priest but had been unfrocked because of his heterodox ideas. His critics would claim that he only parroted what he had picked up from self-help books or wisdom he had imbibed from the writings of Paulo Coelho. There was even a rumor that he was mad and had once beheaded a man.

Only one certificate hung on the salon wall that said: Coiffeur et Barbier de Paris.

A number of amateurs in the trade had tried to copy him, but they had quickly been obliged to close. Other barbers had not managed to cheer up customers who felt depressed, while psychologists couldn’t handle the scissors.

The Spiritual Barber saw off all competitors.

An official from Health and Safety once came to check up on his salon. But, after a detailed inspection of the premises and some questions concerning his method of work, he ended up by accepting an invitation to have his hair cut. And it was not long before he too was unburdening his soul and thereafter became a regular customer.

The salon was decorated with pictures by contemporary painters. There was a library of works of world literature, an aquarium with tropical fish, vases of flowers and classical music in the background. The single chair was covered with natural leather, the scissors were of silver and the stainless steel razors were imported from Japan.

One day a middle-aged man entered the salon asking for a shave. The Spiritual Barber invites him to sit down, places a towel round his neck and begins to lather his face with aloe vera shaving cream.

“Well, Sir. And what brings you here today?”

The man fidgets in the chair and clears his throat, but does not reply. Accustomed to difficult cases the Spiritual Barber gets on with his work in the hope that his customer will relax. The Japanese razor begins to glide slowly from ear to chin, and the blade’s shiny edge becomes obscured under a layer of foam.

“I’m sixty years old and feel old and frail. I don’t talk to anyone and get no pleasure out of anything. My life has no meaning.”

Once he knows what is chiefly distressing his customers, the Spiritual Barber will start trying to smooth away their troubles with his skillful manipulation of the razor.

“All human beings who have not yet died will soon become old and frail. And yet the young are not necessarily the happiest of us. There are ninety-year-olds who have an intense desire to live and young lads of eighteen who suffer from depression. Age is no determinant of happiness and …”

The customer interrupts him.

“What you say may be true, but how can I accept going on living in this absurd world? It’s the 21st century, we’ve been to the moon, we send robots to Mars, we clone living beings, but we humans go on killing each other and letting other humans die of hunger, enslaving them …”

“You and I are not responsible for that.”

“We are complicit. We look on while the word suffers, and we do nothing.”

“And what do you think we should do?”

“You could protest, join marches, write letters to the powers that be.”

“And do you think that will get anywhere? Is that going to change the world?

“That’s how some of mankind’s greatest victories have begun. Protest and passive resistance can work wonders.”

“Do you think that famine in Africa, terrorism or the Israel-Palestine conflict will come to an end if I take to the streets shouting slogans or send an email to some political leader?  Do you suppose that warlords or drug-traffickers will listen to me, when the Pope, the Dalai Lama and the UN spend all their time appealing for peace and respect for human rights and no one pays any attention?”

“At least you will have done your duty as a citizen.”

“So that I can then sleep soundly while the killing goes on, is that what you mean?”

“But why should you carry the problems of humanity on your shoulders?”

“I’ve already told you that we are all morally responsible, you too. Anyway, you tell me what contribution you have made so far to help the world’s unfortunates?”

The Spiritual Barber leaves off shaving for a few moments, lifts the blade of his razor and eyes his customer’s carotid artery.

“I talk with people who need help.”

“A profession which feeds on other people’s suffering.”

The Spiritual Barber applies more aloe vera cream to his customer’s face. From the speakers comes the sound of Maria Callas singing Schubert’s Ave Maria. One of the tropical fishes is blowing air bubbles.

“No one is obliged to come to my salon, I suppose.”

“And where would you want me to go? Do you think I would have allowed a psychiatrist to shave me?”

“You probably wouldn’t be satisfied with the result.”

“That’s true, have you seen the sloppy look of those guys?”

“Of course. Some of them are my customers.”

“That doesn’t surprise me.”

“Right. But let’s get back to what’s troubling you …”

“I’ve already told you. And it seems to me that after all you have no special solution to offer me. Am I right?”

“There’s no need to be ironic. Just admit it. You can’t help me.”

“Would you allow me to ask you a question, then?”

“Go ahead. As long as it doesn’t distract you when you’re tidying up my sideburns.”

“If you were God, what would you do to make it a better world?”

“That’s an absurd question and just proves you’re incapable of helping me.”

“Are you afraid of giving me a proper answer?”

“What do you mean by that? Are you trying to get me muddled?”

“As you know very well, believers will say that the existence of evil results from man’s misuse of the free will granted by God. In saying that, they are letting God off the hook. Atheists wouldn’t waste their time arguing such nonsense.”

“But you are capable of going further than believers and reflecting on the problem without the prejudices of the atheists, aren’t you?”

The man is silent again. A bead of perspiration appears on his forehead.

The Spiritual Barber dips the razor-blade into the bowl and washes it in the water, so that it comes out shiny again.

“You realize, don’t you, that perhaps not even God, whatever idea you may have of Him, can change human nature. He has already tried it with flood and fire. But after a while everything remains the same.”

“Are you trying to make jokes at my expense? Is suffering a comedy, as far as you’re concerned?”

“I’m only trying to show you that there are certain things that no one can change, and all we can do is to accept the world as it is. A comedy and a tragedy.”

“Accept the world as it is, along with all the violence and misery?”

“Yes, because we live in the best of all possible worlds.”

“The best of all possible worlds? All right then. Imagine someone places a bomb in your salon. Assuming you survive, would you accept what has happened calmly, because it’s just all part of human nature?”

“I’ve taken out all risks insurance.”

“Keep your sarcasm for another customer. Nevertheless, what you have just said proves I’m right. Even the lucky ones feel they’re living under a continuous threat. And what are those without all risks insurance meant to do? Who protects them?”

“Do you intend going to hell to see if you can put out the fire? The most certain thing is that you also burn yourself.”

“There are people who go to war zones as volunteers, who help victims of natural disasters, who confront the Ebola virus…”

“So why don’t you go too, to help the destitute? In the end you might find redemption for what you say is your moral responsibility.”

“Now don’t be cynical. You’re well aware that I’m too old and haven’t got the strength.”

“In that case, there’s no need to feel guilty about it. To give a helping hand to complete strangers is admirable, but very few are capable of doing it.”

The man begins to raise his voice.

“And that is what suits you in the end: for no one to do anything for others. So that there are always unhappy people to come to your salon and be cheated.”

The Spiritual Barber understands at last that the customer has brought his own well sharpened razor with him and begins to wonder if he’s a frustrated fellow-barber.”

“After all, what you’re looking for is something more than redemption …”

The man punches the arm of the chair.

“You feel you’ve been unmasked, don’t you?”

The Spiritual Barber again stops for a moment and takes a deep breath, while the fish in the aquarium begin to stir. Unseen by the customer, he swallows a pill.

“Would you like to take the brush and razor and shave me?”

“I’m already cutting you down to size.”

The man bursts into a laugh, then launches into a tirade.

“You weren’t expecting someone to tell you that you’re a fraud and that you don’t succeed in helping anyone, were you? You didn’t think that one day someone like me would come to your salon and put you in your place. Well, that day has arrived. And I’ll tell you something else: you may even be right. The world can’t be changed. Human nature is irremediable. Not even God can do anything for us. There can be no redemption. So why should we care, in the end? And this is precisely why your salon serves no purpose whatsoever. Close this dump!”

The man looks triumphantly at the Spiritual Barber, as if he had taken his scalp.

The latter puts down his razor and holds a mirror to the left and right of the customer for him to check that his sideburns are of equal length.

The man seems satisfied with the work. He smiles.

For the time being the ills of the world were left floating in the bowl in which the razor was washed.