Colin Wilson and “The Robot”

This is an excerpt from my new book, Beyond the Robot: The Life and Work of Colin Wilson.

Wilson woke up to universal acclaim one morning in May, 1956, when his first book, The Outsider, a study in creativity, alienation, and extreme mental states, was published. The twenty-four year old had no idea of the effect his existential explorations would have, nor of the sudden u-turn the critics would take about his work. No sooner did critics and journalists in the UK and US sing his praises, then they did a speedy about face, and Wilson became literary Public Enemy No. 1. Wilson endured the reversal with dignity: he retreated to a cottage in Cornwall, in the far west of England, and for the next half a century produced an enormous body of work in a dizzying spectrum of fields, focusing on a single question, what he calls “the paradoxical nature of freedom.” Wilson analyzed this paradox in books on crime (A Criminal History of Mankind) sex (Origins of the Sexual Impulse), existentialism (Introduction to the New Existentialism), the occult (The Occult), the paranormal (Mysteries), and in a series of philosophical novels in which he appropriated a variety of genres to achieve his aims, writing science fiction classics such as The Mind Parasites and The Philosopher’s Stone, and existential thrillers such as Ritual in the Dark and The Glass Cage. In a career spanning more than half a century, Wilson wrote well over a hundred titles. He died in 2013 at the age of 82.

I knew Wilson; he was a friend and a mentor. My book is the first full-length biographical/critical study of one of most important thinkers of the last two centuries. The excerpt presented here recounts the first appearance of a key theme in Wilson’s writing, “the robot,” an evolutionary “labor-saving device” that, unfortunately, we have allowed to take on more duties than it should.

Wilson first wrote about the robot in an essay that appeared in Challenges of Humanistic Psychology, an anthology edited by the psychologist James Bugenthal, who founded the Journal of Humanistic Psychology with Maslow in 1961.1James Bugenthal, ed. Challenges of Humanistic Psychology (New York: McGraw Hill, 1967). In “Existential Psychology: A Novelist’s Approach,” Wilson wrote “When I learned to type, I had to do it painfully and with much wear and tear. But at a certain stage a miracle occurred, and this complicated operation was ‘learned’ by a useful robot that I conceal in my sub-conscious.”2Colin Wilson “Existential Psychology: A Novelist’s Approach” in Wilson The Bicameral Critic ed. Howard Dossor (Salem: Salem House, 1985) pp. 38-54. This robot, Wilson tells us, is very helpful. He drives his car, speaks passable French and “occasionally gives lectures at American universities.” The robot is very versatile; Wilson even jokes that he sometimes makes love to his wife. The robot is a labour-saving device. He takes over repetitive tasks so that we can focus our attention on other things. Alfred North Whitehead knew about the robot when he said that “Civilization advances by extending the number of important operations which we can perform without thinking about them.” If I had to think about how to type each time I wanted to, I could never think about what to type. Once I’ve learned a skill, my robot takes care of the how, so I can focus on the what. We all know the story of when the ant asked the centipede how he could move so many legs. The centipede says “It’s easy, I do it like this,” and then finds himself unable to do it. His conscious mind has interfered with an unconscious or subconscious process, what in psychology is called “hyper-reflection.” The same thing happens when we become self-conscious, and start to bungle things we normally do easily. We then are getting in the way of the robot.

The robot is absolutely necessary. But there is a problem. “If I discover a new symphony that moves me deeply,” Wilson writes, “or a poem or a painting, the robot insists on getting in on the act.” After a few times, the robot takes over, and he is listening to the symphony or reading the poem, not me. We say it has become “familiar.” What does this mean? Why should a Mozart symphony sound less beautiful or exciting after we’ve heard it several times? After all, it hasn’t changed. We say we have “got used to it.” But what does this mean, other than that we have allowed the robot to classify it with repetitive tasks and, as T. E. Lawrence lamented, “become typical through thought.” Making things “typical” is the robot’s job; the problem is that he does this to things we don’t want to be “typical.”

Animals, Wilson says, don’t have this problem. They can’t learn languages or how to type, having only a rudimentary robot. But when he takes him for a walk, Wilson’s dog experiences the sights and smells each time as if it was the first. Wilson tells us he is often oblivious to the scenery because his robot has taken over the task of cutting out irrelevant details so he can get through a day’s work. Yet when his day is over and he wants to relax, he often finds that he can’t. His automatic pilot—the robot—is in gear and won’t let go. Wilson is not alone in this; it is a central human problem, the central human problem. Descartes believed that animals were really robots. Clearly he was wrong. We are the robots. Or rather, we are like people who allow their servants to do everything for them, and subsequently feel they have lost touch with life, but don’t know exactly why. Wilson is fond of quoting T. S. Eliot’s line from Choruses From the Rock: “Where is the life we have lost in living?” It’s with the robot.

The problem with the robot is the same as with the evolutionary devices we have developed to enable us to filter out “irrelevant” input and focus our consciousness on the task at hand. It works too efficiently. Children experience life with a freshness we envy and try to recapture as we get older, because their robots are undeveloped. Yet it is no advantage to the child to retain an undeveloped robot. The exigencies of life demand one; without it, we would not be able to perform the simplest tasks, from tying our shoelaces to riding a bike, or more demanding ones, like learning a musical instrument. The robot is absolutely essential and our evolutionary intentionality would not have developed it if it wasn’t. If we have allowed it to overstep its duties and have become too dependent on it, this is not the robot’s fault. It is a result of our accepting the “passive fallacy,” believing that life is something that happens to us, rather than something we do.

Now when we want to turn off the robot, we often resort to crude methods, like alcohol or drugs. These can shut the robot down, but at a price. As Wilson observed, they inhibit our ability to act. Drugs or alcohol allow us to feel the richness, the deeper meanings —the “absoluteness of self-enjoyment”— that the robot dampens, but our will and ability to act effectively is dampened too. Threat, inconvenience, crisis can also free us of the robot. Hence the Outsider’s penchant for “living dangerously,” in Nietzsche’s phrase. The robot recognises that the threat requires us to “take control” and briefly exits the driver’s seat; or rather we recognise the need for this and push him out. This is why Sartre paradoxically felt most free when in danger of being arrested by the Nazis, and why many older Londoners remembered the Blitz as the best days of their life. As Wilson notes, Gurdjieff’s method of “induced crisis” is aimed precisely at the robot. Yet once the threat recedes, the robot returns to its job of economizing on energy and doing things for us.

Outsiders feel the effect of the robot more than others; hence their desire for “life more abundant.” They are willing to take enormous risks in order to throw him off, to “cast the spectre into the lake,” as William Blake says. But “living dangerously” is most often counter-productive, as many of Wilson’s Outsiders discovered. The idea is not to get rid of the robot nor to keep administering “shock treatments” so that we can be free of him for a moment. These soon cease to work and fall victim to the “law of diminishing returns,” with greater shocks with less effect. We need to understand how the robot works and why we developed him in the first place. We need, that is, to develop a phenomenology of the robot. 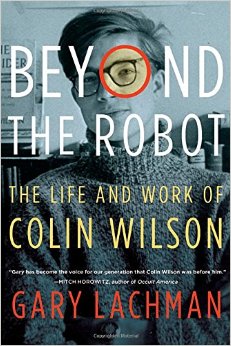