Delusions, by Stanisław Kapuściński: A Review 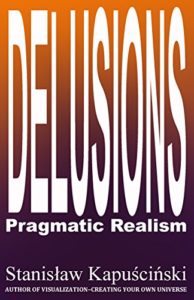 Deciding to review a book is like being a hotel receptionist in Monaco. Your recommendations are expected to be impartial but with the dullness of uniform options you steer your guests towards the hidden restaurant you fortuitously discovered. You hope they will unfold their napkins and enjoy it as much as you did. This book, the chef claims, was inspired by Richard Dawkins’ The God Delusion. He may well have observed the famous atheist in the polished steel kitchens of the Royal Society, cooking up traditional fare, steak and kidney pudding, shepherds pie, boiled mutton with gene caper sauce, knowing the palates of his readers will be satisfied with what they had expected, solid and kind to the digestion. Honestly presented certainly, but then the chef has become famous for that, no dressing things up with persuasive parsley. No foreign muck.

His narrative follows the traditional three courses; Man in the Nursery, in High School, in University to tease out the growth and fossilization of Delusions (of both religious and scientific kinds) and also to show the creation of time (past, present and future) cementing and itself created by this division. It is impossible to identify all the flavours that waft from this multidimensional dish, except to urge a reader to order it. It gives a broad education across both centuries and disciplines, and obscure and classical sources. As importantly, it is enormous fun, spiced and aromatic. Unlike his posturing ‘mentor’ the author’s irreverence and wit make his views the more compelling.

Kapuscinski’s intentions are early implied, to match Dawkins bite for bite and (as honestly) to demonstrate the irreconcilable gulf between intellectual reductionism and emotional religious dogmatism, each flailing towards fundamentalism in trying to flatten one another. In that he takes on Dawkins full square and very gently gradually knocks him over. Not by a deft left hook, but by tugging at his shirt. He admires his opponent’s skill and breadth of culture but laments it is not sensitive to the deeper inspiration which might modify his intellectual stridency.

This reader bit into each dish with relish, savouring the fresh flavours of things turned inside out, the familiar used uniquely, the telling argument nailed with just enough illustration, but never too much. (A few infant prodigies to question the central tenets of Darwinian gradual progress or the non-survival of memory) Kapuściński’s erudition is worn as lightly as a tee shirt pulled over well exercised pectorals of Jesuitical education, Gnostic doctrine, Sanskrit sources, mythological and symbolic familiarity of the Bible and Koran which reduces both fossilised religious distortions and scientific certainties (knowing more and more about less and less) over a bright flame, until both cry for mercy. He remains fairly merciless and for that I celebrated.

In the end it is the primacy of mind preceding brain, idea determining creation, and responsibility in the moment of NOW that lies at the foundation of his appeal to ‘pragmatic realism’. The name sounds philosophically chilly, deliberately eschewing inflation, but it belies the passion, and anger, and incipient despair underpinning this very profound work. He gives you himself, grated raw, and dipped into sauces, both sharp and honeyed. The appetite was self-renewing, and consuming pages effortless.

What remains is a deeply humane appeal to reap the best of human inspiration, devoid of dogma, restoring, indeed pleading for, worshipful sanity derived from self-knowledge and true identity. The essence of the individual, one with god, was derived from the only sources that were left standing; the ancient mythical, the repeated mystical and the personal experiential, now indivisible, simultaneously being and becoming in a universe hopefully emptied of delusion (and scientifically proved pretty empty of anything—the two are not unconnected) but waiting for a better use of imagination and light, with little time remaining. For all the chutzpah of this broad-brush annihilation of false stanchions, the ornate pier has collapsed, the crisis he uncovers is urgent. I thought it brilliant.

Editor’s note: You can download the first part of Stanislaw Kapuściński’s Delusions by clicking this link. To purchase a print or ebook copy of the full book, please visit the book’s page on Amazon.