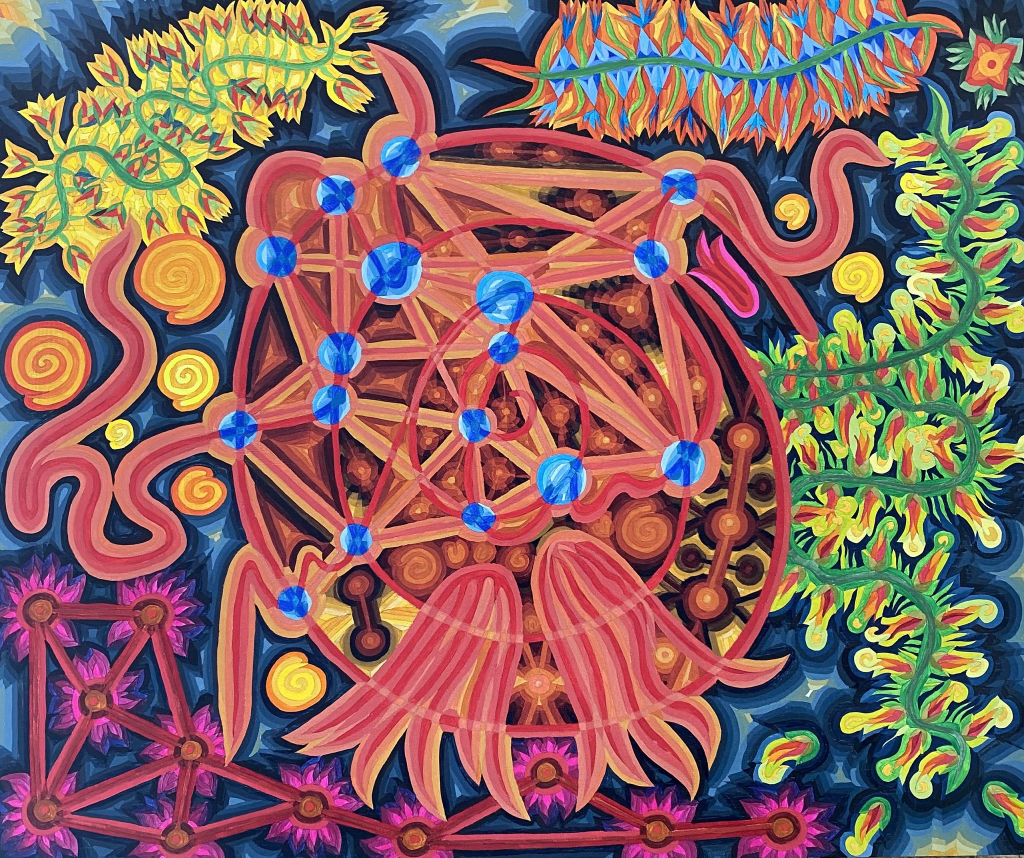 Your mesmerizing work “Synaptic Tides” appeared on our website last October. You’ve hinted that you work has been going in some surprising directions since then. Can you tell us anything about the plans and ideas that you’ve been ruminating?

I started working on larger flat panels, as I wanted to explore the purity of form. I came to the realization, upon reading and studying Ernst Haeckel’s “Art Forms in Nature” that “anything goes” in the natural world—that the apex of creation is in all of us, and that if I were to close my mind to the oppression of self-imposed structure, that the pure vision of possibilities would be transmitted from the universal repository of higher design. Ernst Haeckel  was a biologist in the mid 1800’s who illustrated hundreds of specimens from diatoms to jellyfish. His illustrations mirror the infinite combinations of geometric and organic elements that make up the natural world. So this is the launching pad for my most recent work. I have been mesmerized by sacred geometry forever, and have been attentive to the on-line lectures of Jain 108. My understanding is much more intuitive than it is based in knowledge of mathematics, but I am absolutely in awe of the mathematical mind—how it breaks down the mechanics of the universe into equations that seem sustainable—although sometimes I wonder if even the laws of physics are mutable depending on a variety of universal circumstances. I find an increasing correlation between form and the construct of form, and without setting out to describe this, I find this appearing in my work.

Not only does your work create the visual illusion of a great depth of field, that vertical axis is sometimes also manifested in a very tangible way as you paint on panels that have been built up into “sculptural ziggurats”. Have you always combined painting and sculpture in this way, and if not, what prompted you to include the third dimension into your artistic practice?

In 2012 I felt a shift, and experimented primarily with cut organic shapes that were built up in mostly a centrifugal shape. Being primarily a painter, eventually my work gravitated to two dimensional surfaces once again. I then combined the two disciplines which led to my body of work which is basically paintings set into three dimensions. My work had been leading to stylized natural formations, and by layering the surface, they took a kinetic turn. What occurs is a distortion, as in the folding of space, or torus energy, that affects the way the forms are perceived; so that the surface is undulating and changing depending on where you are situated in relation to the piece.

How do you see the role of the artist in our world? What is the most necessary thing that an artist does?

An artist is actually creating a world rather than just a stationary object. The artist is sailing through universal winds and transmitting truth. It really depends on the artist as to how this truth manifests and is revealed. Sometimes the pure nature of beauty is brought to the surface. Sometimes it manifests as social and political protest. Other times, the human condition is at the surface, as our relationship to the whole. And through pure abstraction, the artist is almost translating a philosophy of being, without the intrusion of thought or concept. Some, such as myself, channel and investigate the harmony and myth of higher perception, and attempt to crystallize what goes beyond what the senses behold. It is a spiritual practice and meditative in nature.

In addition to your individual practice, you’ve also been involved in community-building as the founder of an artists’ cooperative (Galatea Fine Art, in Boston). Can you talk about how artists can nourish each others’ artistic practice?

It is truly thrilling to watch artists’ work evolve. You can actually see a tightening of intention, a refinement of expression happen. I think a lot of that is due to the energy of community—we are a cocoon—a place to gestate and become. People feel this nourishment and it prepares a base, a solid foundation for individual exploration. Our space in particular has had its challenges due to the pandemic, in addition to flooding that all but destroyed it. After much discourse, it was the artists themselves in their stubbornness to keep the gallery alive that rebuilt the space and resumed exhibitions. We are a bridge between what was and what will be. We have had to explore many virtual practices to keep the exhibition component afloat in these times. One way is with Zoom receptions, in which the artists talk about their work to a greater audience than would be otherwise possible at this time. It is challenging on many levels, as we are used to enormous receptions on the area’s “First Fridays,” with hundreds of people coming through and a very festive atmosphere. But the present energy is high, the artists are determined, and the Zoom reception is very intimate and compelling.

On a related note, whose work is inspiring you at this moment?

There is a wonderful tidal wave of women mystical painters emerging. I think it started with the Hilma af Klint show at the Guggenheim in 2018/19, which brought more people to the museum than any other show on record! She was a Swedish mystic and painter born in the mid-1800’s. Her works are altars, and directly communicate to the higher mind. As a matter of fact, part of what really struck me was that she insisted that her work not be shown until I think it was 50 years after she completed her body of work—that she was so beyond the egoic need for recognition, and was thinking of the energetic qualities of it and what it might bring to a certain period of time in history. Such purity of intention. I believe it inspired a deep and necessary feeling of hope.

Related to Hilma af Klint’s work are the paintings of Agnes Lawrence Pelton. As I was studying image after image one night I was struck by the energy that was being transmitted and felt it go right into the higher consciousness. I then began to realize the power of imagery on a different level. My eye had literally been opened by this piece of work.

Sculptors Ursula von Rydingsvard and Chakaia Booker both create organic and mysterious temples of experience although they use completely different materials. Von Rydingsvard uses cedar wood and Booker uses used tires! But the work is almost Geiger-esque in the creation of atmospheric surreal environments.

I long have admired Thomas Hart Benton for the social consciousness of his work through the truth of skewed and fantastic landscape. He glorifies the human experience through our strengths and indefatigable nature. Similar in style is the Canadian landscape painter Lawren Harris. I saw these at the Peabody Museum in Salem, MA and just stood there gawking at the majestic use of contrast and stunning light.