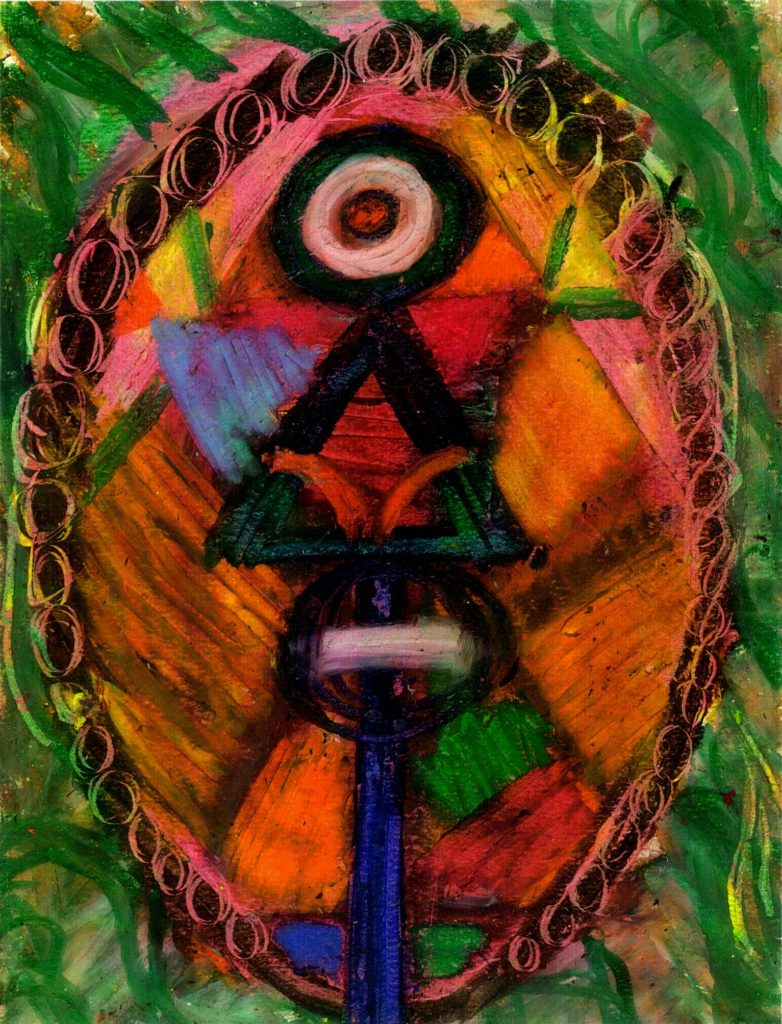 I opened Brian George’s physically beautiful Masks of Origin—adorned with three-and-a-fraction of his own electric geometric red-green gargoyles, to find myself “reading,” if one might call it that, the whole book nearly straight-through that day, and the next.

My winding passage through Masks of Origin—George’s first-to-be-published of six volumes of poetry and essays—began in a room in a little beach town in what used to be Mexico, which used to be Costal Chumash territory, observed from the planet that used to be Jupiter and is now being rehabbed… and it went on like that… until at last, on page 368, I looked up, still in my room.

To get there, I had traveled more than 225 million years around the galaxy’s drain-hole, listening to Holy Names and dirty-tricks and true laments from inside the swallow-louse’s digs in the hollow shaft of a lost feather….

Well, Reader, you might guess by now, this would-be reviewer’s dilemma?

Masks begins—where else?—with What is missing. “Paleolithic ghosts… have removed the stars for safe-keeping…tempting us to think that nothing of significance has been lost.”

Once and more than once upon a timeless time… near the beginning of memory, comes Loss—abrupt removal of pristine awareness, in the name of safety and reason. This moment, this morning, this eon, thanks to George’s translucent writing, comes to us “live” in color, sound, and feeling.

Almost immediately I found that re-entering this “moment” of loss from George’s changing perspectives provoked a dreamy resonance in me of expansion and contraction, insight and doubt. I turned pages and could not stop.

Re-animated spirits are driven to re-tell (and to alter) their stories. Case in point: Medusa’s terrifying visage, her snaky hair, snatched away, reveals itself to be a cover-up for Beauty so fantastic it terrifies—even more than the famous hissing Ugliness capable of turning the arrogantly curious Perseus, and his ilk, to stone. Next time you look, her head is gone. And fleeing with that furious head? Some politician-hero (wind-blown hair, bespoke uniform) carrying it off in a diplomatic pouch, to prove his loyalty to the State.

Later on, student, husband and father, storyteller, our Guide wings us off through vast, simultaneous, omnipresent, tragi-comic Cosmoi—what is the plural of Cosmos?! His biographical close-ups re-orient, nearly reassure us. Then crack into mythic, archaic-spiritual and tragic-historical points of view… on the page and in the spinning psyche.

Naturally, beginning in The Shadow of Loss, our journey through Masks of Origin, if we choose to brave it, proves rougher—and far more rewarding—than any carnival dark-ride.

For one thing, Masks takes place under countless exiled eyes—those still powerful, all-seeing stars. Birds of unknown origin hector George (and us) throughout. Nevermore Birds. Hitchcockean flocking Birds. John Michael Greer’s prophecy-fulfilling Birds, which even now and in spite of mounting evidence of decline and disappearance, are nevertheless on their way—in the wake of humanity’s fall—to becoming the apex species here on planet Earth. Protector-Deity Birds speak out of the undiscovered-by-science eight flute-holes in the roof of their throats.

In Tibetan Buddhist iconography, Protector Deities are among the most terrifying of divinities. A Western interpreter/teacher of mine warns that to adopt a Protector Deity practice means inviting a sacred monster with x-ray senses to do whatever it takes to dismantle your most cherished habits of thought and action concerning your self and your world. Habit-patterns, samskaras, also known as The Puny But Lethal Ones, pretend to be our friends while leading us directly out to the field of Sand Pits. The Pits, like post-war mines, seem randomly sited, randomly activated. But a shadow-self Protector, it turns out, has offered you up, body and mind, to the Ant-Wolf who, while you aren’t paying attention, does the dirty-work of re-excavation and ongoing Pit-repair… To keep things… well, moving along.

Blake, in The Marriage of Heaven and Hell, declares the road of excess leads to the palace of wisdom. Maybe so. But in Masks, the palace has a cellar with escape-tunnels leading into streets, suburbs and cities (Where are the rivers and forest?!) of illness, aging, and death. Maybe Blake was only describing one spoke-turn of the star-wheel?

“Success” even quicker than “failure” sends us spinning along the rim of the next hungry Pit, where Ant Lion’s jaws agape at the nadir of the cone. Those jaws wait. Patient. For the recurring moment in the story when the sand pit begins to rotate, we veer closer, each grain chanting unintelligible advice, and, once again, no surprise, we lose our footing.

In Masks, as the whirling Hospitalities confound, each one’s alluring course of poetry and artistry delights. Is corrected by the tonic of History, that most bitter brew of “breaking news” as old as enslavement and eviction. Round and round we go… where are we going to…?

Following the glyphs leading to the exit of the labyrinth, we begin to see a light that was hidden by the sky. Descending further, we fall into the first age there ever was, into the knowledge that our yearning has made possible. How bittersweet this moment! Our home turns out to be something we have no choice but to leave.

Masks is Jazz. In the specific and in the larger sense. Glints and slivers, notes and rhythms divining multiple directions inside the Music, in time, yes, space yes. Through getting lost. And through reunion—Blackberry Reunion, no water too wide, no motherless child. Oh yeah. Only to find Reunion is a night-dream disappearing us out of the world again… sand swirling at our feet….

Here and now, as I write, I’m listening to a Palestinian initiation piece. Finger cymbals, hand-size tambourines. The loud strokes, plucks, caresses… in unbroken tradition through exile and punishment, I think, as I hear what sounds like a European bass cello finger-stepping up and down fretless strings…. The piece begins with a chorus of joy, ululation, and the skipping-heart of a drum. In the key of ecstasy, perhaps. We know this key exists, we have heard it! But in no time the bass slides off the trajectory my brain so confidently predicted… Off key? No. Another loop around the bend and back again….

Masks as it travels, unravels its own twists and ties, knots and unknots, breaks and restores its own promise. No-thing is hidden. Yet it’s ungraspable. Nothing is there. And everywhere.

Another Buddhist teacher of mine says, either way, gradual or sudden, this emptiness is fruitful.

Why? is only one of the Goddess’ names….

Brian George, in one of my favorite of his many essays, “Itutu: Coolness as Preparation for a Meeting with the Daimon,” begins with questions, and early on concludes, “The only correct answer may be a finger to the lips.” Precisely my response at page 368 (the last) of Masks. My silenced mind accompanied my pen’s mute awkwardness, brain thrown into relentless, fragmented babble. Oh God. How can I possibly come up with anything worth saying about this… this book?!

It was a few days later that I re-read George’s brilliant essay, “Coolness,” on the roots of that (mostly Black) American origin of this peculiar musical genre. Brian writes, “…methods [jazz explorers] developed led only deeper into the night… It seemed likely that there were harmonic laws… but these laws were being constantly subverted and reshuffled.” Exactly. The rules of the game get changed on us as we play. And again, as we fall silent.

Jazz, George reminds us, reveals itself to the hounded runaway, the alienated artist in the big city. Jazz blazes temporary paths through night-worlds. Inevitably we come to a crossroad. Whispered imperatives urge us to choose between irreconcilable off-ramps in our assumed itinerary. Between “… the manifest and the subtle… the contemporary and the ancient… the illusory and the real.” (George’s lyrics, emphases mine)

Masks asks: Why not choose “all pathways at once?” Why not refuse to choose… and let the music take you?!

As in “Coolness,” Masks’ Introductor and Psychopomp, Brian George, kindly advises: Let the music (wherever whenever you find it) rearrange you—whether you be an “alienated subject of a modern industrial state or victim of… centuries of injustice”—let the music seriously rearrange you, within the resonant “web of correspondences.”

Who speaks through Her mask, answers all questions with Because.

If a stranger or a friend, out of sacred hospitality, offers you a psilocibe mushroom to chew at your leisure, would you be willing to set aside a precious day or two to savor it? A few weeks or months to digest it?

Would you, would-be reader?

I realize that recommending Masks to friends, known and unknown, might be akin to buying them a recording of John Cage’s 4 Minutes 33 Seconds. Will they still be your friends when the music ends?

Masks doesn’t actually end, though. There is and will be much more, where it came from.

And there will be those, too, George reassures us, who stay for the music as well as the silence. Those who will “see [his] attempts to speak as a kind of ritual, as a way of pointing to the arcane geometry that joins one world to another.”

Masks of Origin: Regression in Service of Omnipotence (Untimely Books, 2022) is available from the retailers listed on the publisher’s web page.