The Music of the Spheres, Again Audible 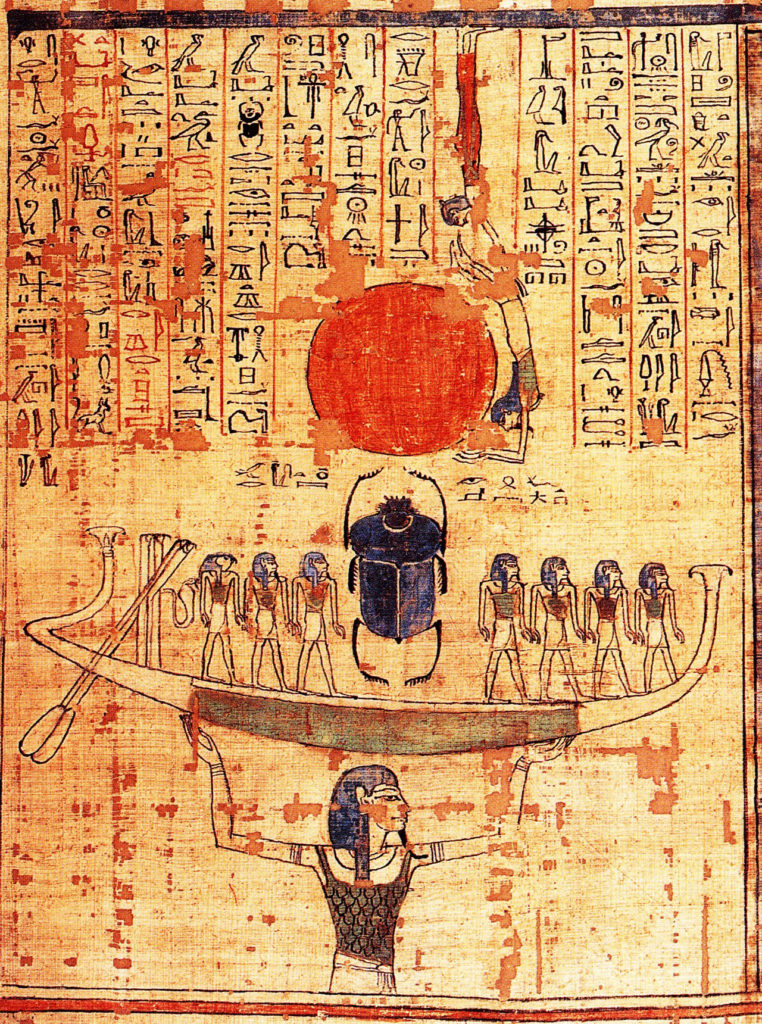 Scarab on the Boat of Ra, from Egyptian Book of the Dead manuscript

There are moments when the world comes suddenly to a stop, when the ground withdraws its support, when a schism opens, into which one may or may not fall. The world then employs its archaic sleight-of-hand to remove whatever faith you may have placed in this event. The structure of projection has barely missed a beat, but the schism in your psyche has not actually been sealed. When I was 17, I had an experience from which I never did recover. To describe it clearly is not to communicate its impact. One night, at 2:00 AM or so, I was seized by an enormously loud ringing and droning sound. At first, I took this to be some type of bizarre emergency warning system, designed to get each person in the city out of bed, although it seemed like overkill for anything short of an imminent nuclear war. The sound could also be compared to Tibetan chanting: enormously low, bone-shaking bass notes supported a middle ground of complex musical geometries, repetitive but chameleonic and difficult to hear all at once, which then rose into almost inaudible overtones.

In passing, I registered the odd lack of activity. No one in my family had joined me at the windows. Not a single one of my neighbors had run into the street. No lights had immediately come on, and most of the houses in the city were still dark. I saw, in the field across from my house, the milkweed pods pop open. I did not wake anyone up, and I hoped that the city would still be there when I woke up in the morning.

In the morning, when I discovered that no one else had heard a thing, I was shocked, yes, but I was less shocked than I would have expected myself to be. I had begun, even as the event was taking place, to suspect that this sound was actually the “music of the spheres.” For many thousands of years, perhaps, the volume of these spheres had been turned down way too low, or it could be that faceless functionaries had plugged our ears with wax. Then suddenly—no doubt for reasons that were long ago explained, but by temperamental teachers, and in a language we don’t speak—the music became audible. Certain things, once heard, cannot later be unheard. With my ears a bit more open than they were, I also came to understand the implications of my exile, the hard limits of my ability to communicate what I knew.

Years later, in 1992, I had just finished the first coherent version of To Akasha: An Incantation for the Crossing of an Ocean. There would be quite a number of others. This first one was significant, however. In an attempt to create a body from my spiritual explorations, I had filled notebook after notebook with circuitous scribblings. Together, they formed a pile about ten inches high. This 80-page version suggested that there may be hope for me yet.

It was 11:00 PM. I was still at work, and I had just found out that my relief would be an hour to 90 minutes late. Restless, and very eager to get home, I went out for a walk around the building. A few squeaks and some static trickled from the exosphere. With a twinge of concern, I noticed that my shadow, bit by bit, had begun to disregard the law that it should imitate my movements. It measured between four and thirty feet, and it would slip from one length to the other with dangerous rapidity. It seemed possible that my height was actually changing. In addition, I did not dare to look at my reflection in the window, for fear that it would not be there. Then suddenly, at my feet, I heard a loud clicking and banging and clattering sound, like a bunch of scissors snipping, along with pots and pans being knocked together. Looking down, I saw a luminous red-gold scarab, about two and one-half inches long. It was flapping its wings, and doing a kind of geometrical dance, and going out of its way to make sure that I would stop to pay attention.

Are there scarabs in the Boston/Cambridge area? There were certainly none of this size or color or beauty, and it seemed unlikely that a dung beetle was supposed to be emitting light. All of this was strange, but stranger still was that I had just Xeroxed the inner cover for the book, upon which was a picture from an Egyptian manuscript of a scarab riding in the Barge of the Enead—the nine Egyptian gods—with his forelegs holding up the Sun.

What else could I do? I followed where the scarab led. I followed him for about 80 feet, around the front and then around the side of the building, at which point he flew up and positioned himself about three inches down from and directly under the center of a lamp, as though, once again, he were holding up the Sun. “Thank you, thank you, thank you,” I repeated in my mind, which I had become convinced that he could read. My mind was almost altogether blank, like a sky with a few clouds, through which bolts of compacted information, like lightning, would flash and then dissolve. I did not dare to move, and I stared, transfixed, until my relief arrived an hour and a half later. The scarab was still there when I left. The next day, when I arrived for work at 3:00 PM, I found that, beneath the lamp, a faint triangle had been inscribed on the cement.

Through the years, I had experienced quite a number of synchronicities, events in which the inner and the outer worlds, for a moment, corresponded. The encounter with the scarab nonetheless took me by surprise. This did not seem like a “meaningful coincidence.” Rather, it seemed like a sign that had been sent, and the sign itself appeared to have some degree of agency. What is the sound of one anonymous poet speaking? The scarab was the physical embodiment of an answer.

There was another, more recent, incident, as well. If the encounter did not grab me by the hair, as did the first, it too could not later be unseen. That the incident was not dramatic was perhaps a part of its point. In June of 2010, at midnight, I was walking by a field a few blocks from my house. I had left for work at 6:15 AM. It had been a long and entirely uneventful day. I had no energy left, and I could not wait to get home. From a distance, I observed that the night was very beautiful. I felt nothing. Clouds billowed, like the spirits of dead architects, across the moon, and I became convinced that a scarab would be waiting for me on the sidewalk. And there he was! This was a slightly smaller red-gold scarab, not quite as luminous, but, then again, I had learned to pay attention.

The fragrance of the night washed over me: cut grass, car exhaust, cedar chips mixed with dung, sumac in heat, salt air from the ocean, rosemary. The scarab, after doing a little geometric dance, then crawled toward my right foot in a perfectly straight line. He touched the center of the shoe with his head, looped sideways, walked straight between my feet, keeping to a path that was equidistant between the shoes, and then looped back to touch the center of my left heel, before veering off at a 45-degree angle into the field. I took this to mean, “Hello.” There was no grand drama, only a silent exchange of gestures, unnoticed by the world.

Who knew that scarabs were such organized creatures? Truly, they have rolled the cities of Prehistory into a ball, which they then proceed to exhibit to the blind. They are OCD metaphysicians! Earlier, it had taken the equivalent of an air-raid siren to remind me of the inner workings of the cosmos. If the music that I heard was real, an encrustation of defenses had led me to hear it as an alarm, to perceive these primordial harmonies as a threat. The two scarabs employed a subtler mode of provocation. If I was far too big to follow them through the cracks in the lunar mirror, at least I had not stepped on one. I felt that I was making some small amount of progress.

I take no gifts from the decentralized kleptocracy. I put no faith in credentials, my own or those of others. I do my best to be aware of the actions I perform, to pour my blood into my writing, to speak out of the dark heart of the zeitgeist. I would see with eyes that are lit by a distant star. I would hear what was whispered on the Barge of the Enead. I would kiss the stone that prompts fear in the most ancient of philosophers, the stone whose energy shook apart the first home of the gods. These scarabs are the witnesses to the seriousness of my efforts. It was difficult to tell whether or not they were impressed. One makes do.