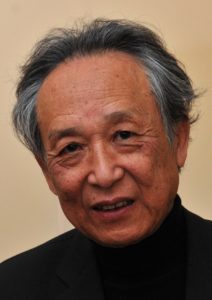 Xingjian Gao was born on January 4, 1940 in Ganzhou, China. As a child, he was encouraged to paint, write and play the violin, and at the age of 17, he attended the Beijing Foreign languages Institute, majoring in French and Literature. He is known as being at the fore of Chinese/French Literature, attempting to revolutionize Chinese literature and art.

At the height of the Cultural Revolution, Gao destroyed all of his early work after being sent to the country for “rehabilitation.” His “Preliminary Explorations Into the Techniques of Modern Fiction” caused serious debate in the Chinese literary world by challenging the social realism that was at the core of Chinese literature and art. The authorities condemned his work and Gao was placed under surveillance. He left China for Paris in 1987 and was honored by the French with the title of Chevalier de L’Ordere des Artes et des Lettres.

None of Gao’s plays have been performed in China since 1987, when “The Other Shore” had been banned. In 1989, Gao left the Communist party. After the publication of “Fugitives,” which was about the reason he left the communist party, Gao was declared “persona noon grata” by the Chinese regime and all of his works banned. On October 12, 2000, Gao won the Nobel Prize for Literature, becoming the first Chinese writer ever to do so. He is well known for his writing as well as his painting and has had exhibitions all over the world.