Notes on Wallace Stevens and Animism

"The Old Hall: Fairies by Moonlight," by John Anster Fitzgerald, circa 1875

Wallace Stevens’ poem “A Postcard from the Volcano” is a beautiful meditation on matter and memory. It brings to mind the philosophy of Henri Bergson. The poem suggests the existence of memory in inanimate objects. Or more precisely, it proposes a conception of memory that has nothing to do with “information” contained in the mind. Memory must rather be imagined as expansive, extended, material, atmospheric. It is memory that contains us, not we who contain memories. The past is a presence.

The poem’s narrator is reflecting on the mansion in which he lives and plans to die:

In the future, the narrator muses, the house as an entity will include all he has said and thought about it. Which is to say that the experiences through which an object manifests to us are constitutive of the object itself as an autonomous entity. Objects take shape in experience (human experience being just one variety), but they do not exist “within” our experience, “within” us as subjects; rather, each experience of an object expands that object, allows it to express its being, objectively.

All of the elements that make up the mansion exist on their own, experienced or not: Stevens is no idealist. But the elements can only constellate as a mansion — a homely one for the narrator, a haunted one for the children of the future — through encounters with human beings who are themselves similarly constituted.

In other words, all things substantiate themselves in encounters, in meetings, as Martin Buber wrote. It is through human experience that a house learns to be a house, that it learns to be homely or haunted as the case may be, just as it is through the strange sentience of the house that we become home-dwellers, which is to say human beings. A person coming upon a house is an encounter, but it is an encounter between equals at the primal level.

A new house feels cold and dead because, as an object, it hasn’t yet learned to be a house. It is a house in form only, which is to say a design, an intellectual ideal, the concept of a house given material consistency. When we say that a house feels lived-in or homely, we are saying something about the house itself, not just about our impression of it. The house has come to life as a house; it knows itself as a house. It has a genius loci, a spirit of place, indistinguishable from it.

Later, having been abandoned and then occupied anew, the mansion in the poem will hold as part of its being all of the memories formed in conjunction with it. My guess is that nine times out of ten, this is what we mean when we speak of ghosts. “Children,” Stevens writes, “[will] speak our speech and never know,”

The mansion confronts the children with all of its past that is real and, in a sense, ever-present. Stanley Kubrick’s film The Shining reveals this with a force equal to Stevens’ poem in the form of the Overlook Hotel. 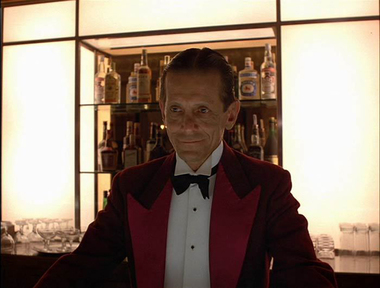 “Orders from the House, Mr. Torrence.”

Upshot: there is no interiority. Belief in interiority, in private unextended subjectivity, is a modern conceit. It is a human attempt to reclaim the centre that humanity once imagine it occupied. In fact every private feeling, every “mental impression,” is an objective material event. Matter is spiritual. Matter is a thinking substance through and through. Everything is alive. “All things shining.”

This was originally published on J.F. Martel’s blog, Reclaiming Art.