Sustain/Decay: A Philosophical Investigation of Drone Music and Mysticism (Review)

Drone. Is. Eternal. Primal origins exposed via mass ebbing forward from the past while an ethereal knell drifts incrementally from the future. The center is I. Investigating such phenomena through linear pathways broaches the absurd. Meditations, philosophical rants, poems, short stories, interviews, diagrams, Rorschach-like images, investigations, excoriations, imaginations, excitations all converge on and are underscored by The Drone. Centered on the I, subjectivity is a given, a process that allows both writer and reader to wallow in ideas and revel in questions of sound and meaning indefinitely. Yet neither form a stable enough subject to avoid contamination by others. The I gives way to the many and the many to the sound, The Drone, infinite, endless, in which the body is “vibrated by sound which, listeners repeat, ‘is to be experienced not understood’.” 1Sustain/Decay, p. 19.

This is the central paradox—to discuss sound is to attempt to understand it. To define the experience relying on processes and states of mind is to limit corporeal interaction by invoking words, words, words. These articles swirl and spiral, philosophically investigating the activity of listening, paradoxically, where the act of hearing, of experiencing sound in body, in mind, eludes words and remains just out of reach. If good music writing implies a desire to listen to the works discussed, the writing here transcends this activity in order to raise questions about the very act of listening itself. As Kristine Wolfe points out, “the purpose of this article and the introductory presentation of these techniques is to inspire the reader to go out and explore his or her individual listening practice as it relates to one’s individual experience of sound.”2Ibid., p. 80. Or, as is expressed by the editors, “…this book is a call to approach composition and attentive listening as ritual practice / / to approach drone music as a training ground for the attention, for cognitive endurance, for a weird absorption from which hidden transformations might flower.”3Ibid., p. 7. A tall order, but a worthy goal.

At its core this volume presents a collection of essays geared toward demystifying the mystical, explaining the unexplainable, revealing obscured connections, and uncovering the previously hidden. In many cases what you get are individual authors “freely thinking about the problem myself and offering my own personal results.”4Caron, “On the Transcendental Aesthetics of Time-Stretching,” p. 129. The title captures it all with some pieces leaning toward drone, others mysticism, and still others philosophy. If you like those things in any order or combination then, by all means, pick up this book, which includes some beautiful images and diagrams. (If you can spring for the full-color version with the Kim Cascone curated disc of transcendigital drones you will not be disappointed, if not, the black and white version sans disc is remarkably affordable, the drones can be downloaded here.)

A quick contents scan reveals complex and intertwined titles that address such subjects as: dronoclasm, the relationship between blackletter, mysticism, and drone metal, the meditative qualities of transcendigitalism as a holistic field of relations, resonant VS anechoic chambers, the hieroeidetic field, sounds heard as light, diagrammatic compositional scores, ritual and otherwise altered consciousness connections throughout history, the relation of the Catholic Church to Pantheistic drone, time-stretching, tone exhumation, absentology, the black death, the existential question of immortality, the embodiment of heaviness in a lingering riff, the entirety of the would-be zine Weirdrone Tales (which in many ways is the most direct drone address here since much of it reads like traditional album reviews), and finally an interview with Attila Csihar from Sunn O))). Yea, it’s a lot to take in. 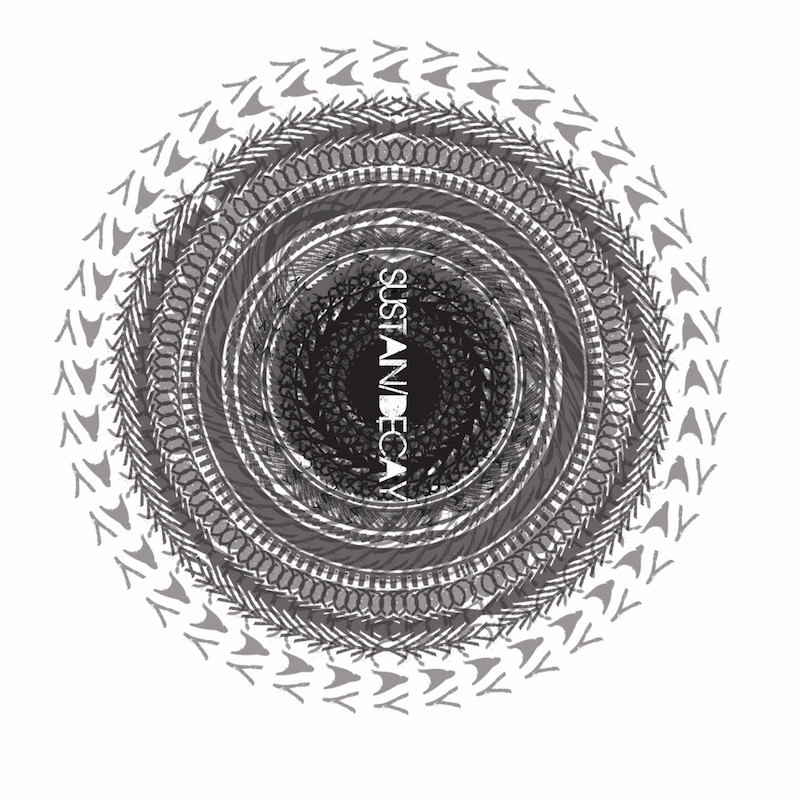 Sustain/Decay: A Philosophical Investigation of Drone Music and Mysticism / Abstracts

Clearly an ally in meditation and expanded forms of consciousness, the drone is described as dilating time “for both performer and listener, allowing them to temporarily exist outside of time.”5Cascone, “Transcendigital imagination: developing organs of subtle perception,” p. 34.

This extended temporality includes the body as resonant space in which sound “drowns out or mimics ambient environmental sounds, flattening aural differentiations and rendering the audio field a single contiguous object of thought rather than a collection of objects.”6Harris, “Pleromaticatalyst: Ritual Intoxication Toward the Universal Field,” p. 117. Drone, then, has the potential to induce a trance-like state and alter our experience of both time and space.  In doing so it has the imaginable power to transport the listener “through the ‘threshold between our world’ and the ‘world of the spirit,’”7Norman, “Weirdrone Tales, p. 217. however that “spirit” is defined.

Moving between the academic, the technical, the informational, and the purely experimental, this collection poses a schizophrenic assessment of sound, not in a pejorative way, but rather a state of mind in which consciousness, moving from one perspective to another, is overwhelmed by disparate voices all clamoring to relate some aspect of drone. In toto it reads a bit like a David Mitchell novel, with a shifting focus and perspectives all converging on a singular idea. Some authors take on individual drone works, some the idea of drone as a metaphysical reality, others meditate on death and philosophy and time. This is not music criticism in the traditional sense, nor does it purport to be, but is an exploration of sound and perception that occasionally alludes to bands like Sunn O))), Conan, Coil, artists like Cascone, Eliane Radigue, and Scott Walker, among less well-known but nevertheless engaging artists like Trepaneringsritualen and From The Bogs Of Aughiska.

Many of the voices proceed by metaphor, others by less direct routes. At the center is the reader, the I, sifting through the cacophony in search of meaning, in search of an elusive truth, an epiphany about drone. But, like a Beckett play, the reader must listen for what he or she can hear, as continual nuggets of wisdom arise from the din. This is a more honest and impactful experience than a purely linear or academic one. In this sense it is a book designed for exploration as opposed to a cover-to-cover read. Its intent is inspirational, to shake up perceptions and approaches to sound with links to pursue, footnotes to examine, and listening suggestions galore (did I really wait this long to fully dive into the music of Eliane Radigue?). Balancing the three ideas in the title the stand-outs include: “Unstable metaphors for the inaccessible: mysticism, blackletter, and drone metal,” by Owen Coggins; Kim Cascone’s “Transcendigital imagination: developing organs of subtle perception”; Kristina Wolfe’s “Isoluminance”; Gary J. Shipley’s “Non-terminator: rise of the drone gods”; and James Harris’ “Pleromaticatalyst: ritual intoxication toward the universal field.” Other readers will undoubtedly have other favorites.

Floating from time period to time period amid spiritual and religious observances and contemporary soundscapes the drone remains consistently omnipresent, like the angel of death, hovering just out of reach yet connecting all things living and dead. However, as Shipley articulates, “while drone music may aestheticize a timeless catastrophe of sorts, it only does so on the promise that its timelessness is never made permanent, that its endlessness remain only an appearance.”8Sustain/Decay, p. 199. The drone is, and always will be, in contrast to silence and rhythm, a form of timelessness punctuated by absence and an insistent present, best captured by the specter of deconstruction that hovers over this volume (as do H.P. Lovecraft and Deleuze and Guattari). Sustain and decay are not antithesis, but both sides of the same drone coin. While Joanna Demers is quoted as stating that “it’s exceptionally difficult to write about drone music,” 9Ibid., p. 199. this collection imaginatively addresses this challenge by writing about the experience of drone filtered through the mystical and the philosophical.