The Burning Ghats of Varanasi, India

I’m sitting downwind from the raging fires that are viciously swallowing up whatever still remains of the material manifestation of a once breathing, living body. The skin on the face peels back to reveal features which do not distinguish one from the other, but rather reveal our human sameness. Fingers curl and shrink into tiny bones, into ash, into nothingness. The skin shivers as it burns, shape shifts into a gum-like substance, then char, then dust, releasing from it an odor that my nose and throat repel. I am thrown into fits of coughing and desperately try to spit up whatever is slowly attaching itself to my bronchial tree, whatever is fighting with the tiny cilia soldiers which are loyally protecting my body from further invasion. But it’s too late, for death has already entered and is winning the gruesome battle. Death carried by wind, penetrating my hollow cavities and making its presence bitterly known. I can taste it on my tongue’s back palate; the spicy, pungent, acrid flavor of charred fingernails, and sizzling flesh, perhaps even some Indian spices consumed during the last supper. I want to run back to my room and wash my body, scrub my insides, even if the water for washing comes from the very river that holds the ashes from these hungry fires, along with the bodies of those who were above and beyond burning—the holy ones, the pregnant ones, the lepers, the snakebite victims, and, of course, the children. I want to escape and never come back, never look back, but I know I chose to come here, was summoned here, and I must respect the choice and the calling. 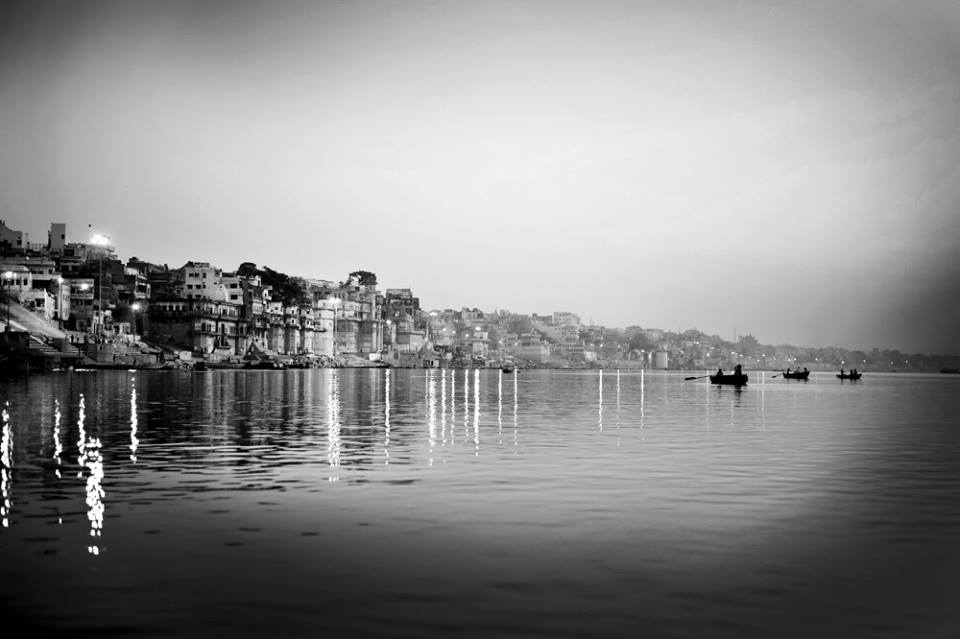 I can feel my stomach stirring, like it used to in the presence of cilantro, and decide to move away from the smoke of this barbecue to find a place to sit, which my senses can actually tolerate. I move to the side that tickles my wet finger when I hold it up to the wind. It’s a better view anyway, I can actually see the intricate details of what the blazing fire reveals. I pay close attention to the process of transformation from one thing to another, from bigger to smaller, from flesh to ash—alchemy at its greatest. It’s a motion picture that I know will be imprinted in my memory forever. How could it not be?

My attention shifts to the animate scene around the pyre and my stomach responds in sharp spasms. A dark skinned man with a single crooked tooth protruding out of his mouth as if it was meant to open cans, places his chapattis on the stack of burning wood that is containing a deceased man, and warms them up for lunch. It’s a grill of sorts for those who choose to see it as so. Young dogs who want to survive, follow the smell of flesh and await for a bit to come rolling down so that they, too, can have their lunch. A mysterious part of the body, beyond recognition, falls to the ground, and is at once the desired object of tug-of-war between three identical looking, mangy puppies. “Good food for dogs. Strong!” a lanky dark skinned man with a nose as wide as an elephant’s trunk, yells at me from ten feet away, when he catches a glimpse of curiosity mixed with bewilderment, in my eyes. I give an automatic wobbly head bobble, in between agreeing and disagreeing, for I am at a loss for thought or conviction of any sorts.

Life goes on at full throttle in this place, sharing sacred space with death, mystery, and the reality of impermanence. It’s a busy world for those who bear witness to these last rites on a daily basis—the children playing cricket, losing a ball or two to the Ganga or the ravishing flames, the chatty men surrounding godly chai stalls discussing trivial subjects, goats going about their goat business, jumping from step to step, bench to bench, toddlers wobbling around, trying hard to learn the mastery of balance from the jumping goats, monkeys making fists and screaming from the rooftops at anything that is not a monkey, cows making their holy way through the crowds, seemingly understanding that the world around is just an illusion, and the workers (untouchables) who tend to the fires with mundane expressions, like it’s garbage, or something other as irrelevant, that they are burning. 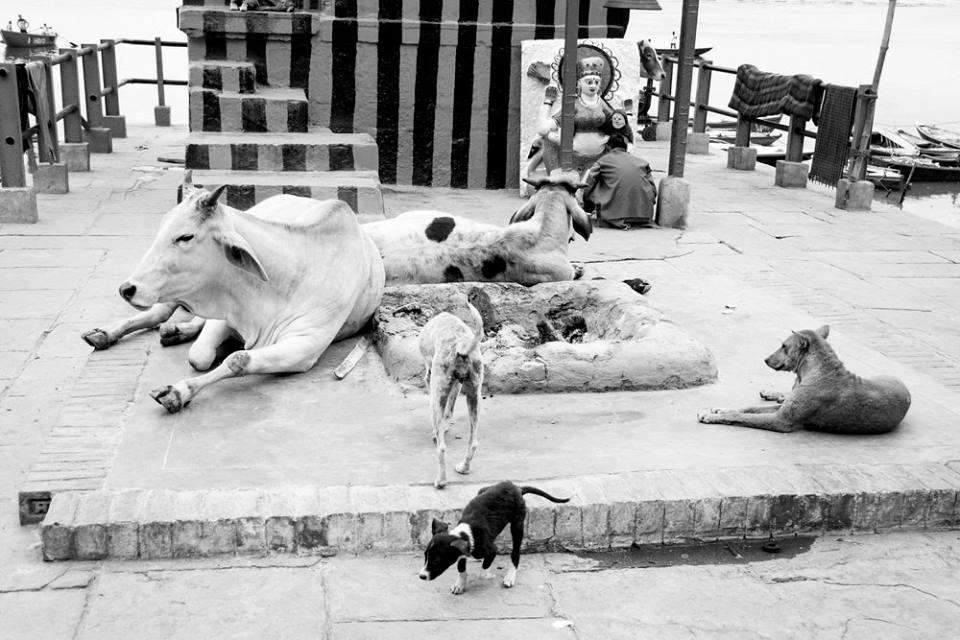 Of course, there are also the pilgrims and foreigners, who stop and watch, sometimes taking pictures or filming, before they get reprimanded by locals for the invasion of something divine. Or those who cover their orifices and run by, as if death was famished enough to chase after them, giving into the fear which is said to be the greatest among humans. I find myself somewhere in the vast middle of these groups. I sit and watch the last tango between life and death, observing also my very real and present discomfort. I cover my mouth and nose to defend my vulnerable senses, but remain here, hours after every other gaper has moved on to bigger and better, and more alive. When I have my fill of emptiness, I depart and walk along the Great Mother Ganga. A sense of peace fills my being like I haven’t experienced in ages. I am silenced to pay my deepest respects.

I come back to the burning ghats every day, because each new body helps rid the conditioning of my fears, if only little by little. I breathe it in, until my own body no longer fights it. There is a beauty I recognize in the metamorphosis before my eyes that activates me, as if I have watched people burning for centuries, as if I have been burned in a pyre myself, at the stake as a witch, or an oven in a concentration camp. My ancestors are speaking to me through my DNA and I can only acknowledge their voices through the sensations in my body, through its full relaxation. The more I watch, the more I relax, and within that, a new dimension opens, one beyond life and death. Those who have died are suddenly alive, louder than India herself, silencing the whole world around, until nothing is left but a quiet passage. Here, in the midst of the last rites.