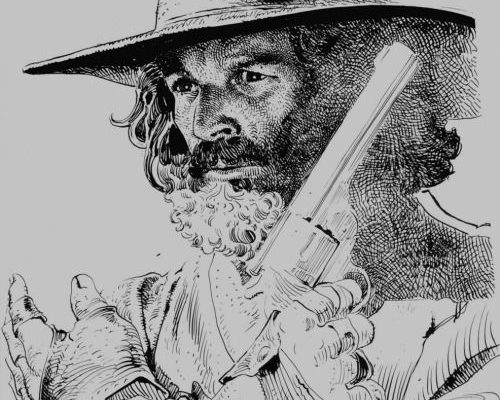 An introduction to Jodo’s movies: “Who Is Alejandro Jodorowsky?”

By  |  7 Oct 2019
Feature Image: El Topo AKA Alejandro Jodorowsky as penciled by Jean Giraud AKA Moebius.

To publish or not to publish this visual essay/documentary as a Metapsychosis’ microdose, that was the question. To begin with, it spoils The Holy Mountain’s ending, which is probably punishable by law. It also makes some glaring mistakes; it was Salvador Dalí and not Orson Welles who was asking for $100,000 for every minute of screentime to be on Jodorowsky’s Dune, and the reptiles in this classic The Holy Mountain scene are clearly Aztecs, while the toads are Spanish conquistadors, as it depicts “The Conquest of Mexico”:

On the other hand, it’s done with love. It showcases how incredible of a visual director Jodorowsky is, his intricate production design, how deep and thought out the content he presents is, his brutality and lack of filter, how influential and underappreciated he is. It’s thoroughly edited, it evokes emotion, it contains interviews where we can hear the man speak for himself, and it makes you want to go and see the films. So, it earned its right to be here, and up there it is.

It’s important to notice that this docu/essay only covers Jodorowsky’s career as a director and that the man, the myth, the legend is an integral artist. He rediscovered the Tarot de Marseille and often reads it for free in a Paris cafe; wrote novels, a dozen comics, and several non-fiction books; invented and developed psychomagic; paints and sculpts. And raises hell on Twitter constantly, among other things.

Here are a few selected quotes from Goodreads as an example of the gems on Jodo’s mind:

“One day, someone showed me a glass of water that was half full. And he said, “Is it half full or half empty?” So I drank the water. No more problem.”

“What I am trying to do when I use symbols is to awaken in your unconscious some reaction. I am very conscious of what I am using because symbols can be very dangerous. When we use normal language we can defend ourselves because our society is a linguistic society, a semantic society. But when you start to speak, not with words, but only with images, the people cannot defend themselves.”