How to Live in the Future (Part 2) 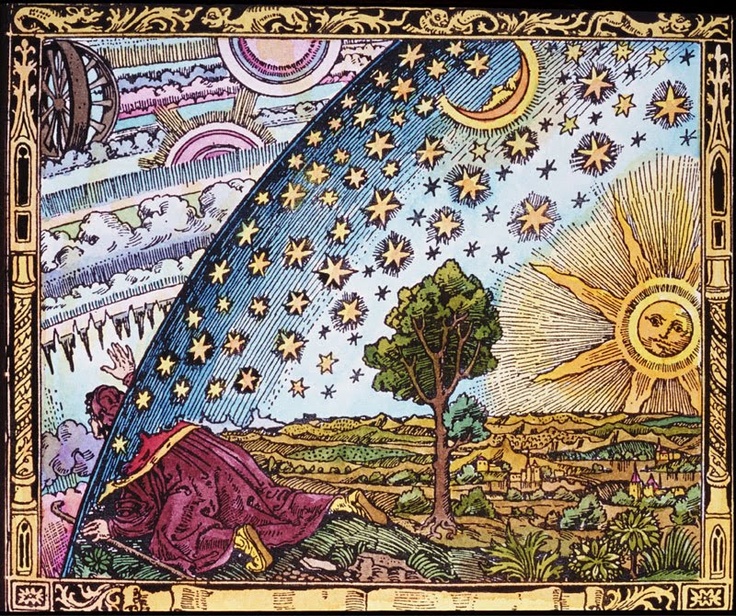 “Sexual selection would appear to be a search engine for [compression algorithms] in the implicate order, an ecstatic browsing for patterns that will increase the capacity of any system to produce ever greater amounts of entropy.” – Richard Doyle

If you plan to live in the future, you have failed already: one of its defining traits is that it’s unpredictable. We don’t need a technological event horizon for this to be true (but they are actually quite frequent). The real Singularity that Church of Kurzweil devotees displace into the fruiting moment of today’s still-juvenile Ecology of Stuff—that sharp discontinuity between what is and what can’t be imagined, lives right now and always now, and we’re inside it. It’s the canopy of stars we pierce when we embody old alchemical engravings, poking our explorers’ heads out through the sky-as-limit-of-the-known. It is the Bardo of Tibetan mysticism, that chaotic space between our incarnations in which everything occurs at once—and every moment is the Bardo, since our lives are tunnels made of gates, and every day’s a new year. Every moment’s an inflection point between the end and the beginning of innumerable stories flowing in all possible directions. (If you don’t agree, just sit and listen long enough, and evidence will come.)

Perhaps the most surprising thing about this Day That Changes Everything is that we’re swimming in it all the time. If some Omega Point in hyperspace, the Eschaton that waits for us at history’s end, draws all mundane phenomena into its all-embracing unity, we’re implicated in that vast conspiracy already. We can celebrate. But particles apparently pop in and out of being all the time, each moment a Creation. All of it occurs at once, a party more than a parade. So point me to “the” Singularity, again?

That said, the future seems to have a character that holds up to the deconstruction of our histories: it’s more of everything. Defining time as the apparent movement of relationships between entangled objects—space as measure of entanglement—“time’s arrow” points to greater entropy, an isotropic, isomorphic cosmos in which every game’s been played and all can come to rest at last. But en route to that final moment, entropy-as-evolution seeks the best-fit path to oceanic stillness, and contrives the paradox of order-as-a-means-to-emptiness: the metabolic flurry of our intricate ecologies, no niche unoccupied, the fractal map of river deltas fitting neatly over our phylogenies and food webs. Winding tributaries and the “tangled bank” of Darwin’s evolutionary wilderness take shape as the inevitable system-seeking-rest, its filaments forever reaching from the trauma of explosive origins to grasp at peace in full and evenly distributed disorder.

Every action has its equal, opposite reaction, though. The liberating “march of progress,” Eros constantly transcending limitation by devising and inhabiting more brilliant and adaptable new bodies, is actually the very definition of conservative: the conservation of momentum, energy, and information as the cosmos rearranges its components to achieve a quicker peace by “stepping on the gas” and dissipating everything more rapidly. The answer to the ever-loving question of how order comes from chaos is that order is just more efficient chaos—an accomplice, not an adversary. Every tidied desk results in larger landfills; every landfill is a mine awaiting artificially intelligent trash harvesters; the ecosystem that matures to weave together DNA and carbon nanotubule microprocessors in an Anthropocene beyond the over-simple categories “man” and “nature” is itself one giant dissipative structure, functioning as an excretive organ of the Sun as it assists in the accelerated burnoff of the Big Bang.

So: two things collide to make a third. The third thing causes a more intricate relationship between the now-three things that make a fourth. Each novel species founds new niches that are filled as soon as luck mutates a nearby organism up the slope of fitness to become a key to fit the lock. The whole thing drives itself, the ever-deepening complexity of Gaia just a crystal growing in solution, ratcheting on up the double helix, just the natural consequence of radiating heat.

(Intelligence is implicated in this: more complex environments create the need for teams of “individuals” to form and endosymbiotically enfold their members into larger creatures—smarter creatures that have more sophisticated needs and new dependencies—and these conditions favor more diverse and intricate societies, which count toward the increasing intricacy of the whole ecology, which favors teamwork as a strategy, and on we go until the Internet appears to link each nucleus of nation-state and corporation into one great planetwide amoeba, and beyond, our pseudopods already reaching into extraplanetary space…)

And so it is that evolution tilts the narrative toward more of everything. We didn’t leave bacteria behind when we got into bigger, and then bigger, huddles and grew tissues, organs, spines, societies; we made a hundred billion previously undreamed jobs for germs to do. It was (and is, in that eternal and apocalyptic light infusing all of time) a transmutation of the flesh: the simple taken up into the great complexity of something both ineffable and vast, and unimaginably generous. No evolutionary layer left behind, each one the platform for and beneficiary of the next. And when we fuse with our machines completely, we will not render humankind extinct; but will explode in our diversity to offer every variation possible upon the theme of “human,” most of which do not exist today.

The permeable membrane of the atmosphere, so wider than the borders of our nations, just as they were wider than the walls of cities, means a bigger social body, made of far more kinds of people, than were necessary to sustain the spirit of a fatherland or motherland. When cities came they made us all a little dumber, as they made us smarter—specialists in pottery or farming or religion lose a little bit of each as far as knowledge was, before, connected through and through to everything, and pottery was farming and religion, all of it one motion, not the purview of an educated expert. (Presumably, and likewise, DNA was once more flexible than it is now, more potent but less realized, far less speciose.) Now, we have so many kinds of jobs, they do not all have names, so myriad are human economic functions; and when our society has stabilized to know itself at global levels as a day-to-day sensation of each local human life, our tasks will be so fluid, numerous, and partial that we will have moved beyond the modern experts in both hyper-specialization and increased awareness of how miniscule our knowledge is to that of the entire Commons. Each of us will be so much more, such empowered emanations of the Biosphere, and so much less, tiny in the corner of our wide experience, compared to egocentric ancestors with relatively static “jobs” and personal identities. Eventually we will take new bodies with each thought, the epistemic line erased between the-generation-as-experiment by blind selection forces and the-metamorphic-flesh-as-proposition by machinery of spirit, assuming selves to take on certain tasks. The arrow is toward more life, more apparent choice, more radiant and dangerous diversity—all hung together, maddest-ever symphony, admired all at once.

This order, which we organize and make explicit, the “invisible environment” of the cosmos’s distributed intelligence as manifested in the Biosphere’s webwork of thoughts-as-species, is already “out there” waiting to be recognized and drawn down from the heavens (metaphorically). That is one way the Singularity is here already—it hasn’t gathered, coalesced, and focused into history yet, but all of it already lies in wait, the Eschaton at history’s end impressing every moment with its tugging yearning, showing itself to us in and as a universe compelled to speak.

And it can be no other way. The game was rigged “from the beginning,” which here means the origin beyond the Alpha and Omega, not “t = 0” but the architecture of the vacuum, in which past and future happen simultaneously, and the end and the beginning codetermine which of all nows swaddles us between. We are a path drawn from all possibilities, the likeliest of pasts and futures shaking hands to meet as now, and that’s why we get so confused about causality—because we haven’t caught our talk of time up to the networked and nonlinear epistemology of ecological, electric modern thinking.

That’s the essence of “time’s arrow”—echoing Pierre Teilhard de Chardin, the narrative that our spacetime-projecting minds derive from pure unboxed experience in light of our best scientific work, the best-fit story to survive in this World-Wide-Webbed age is this: time moves from Singularity to “Intertwingularity,” and all the while The Great Perfection is and isn’t waiting round the bend for us.

The evolution of self-organizing parts to weave together an Omega Point that wakes up to itself at every level is the equal, opposite momentum to the involution of the already-and-always order ever seeking novel ways to manifest in form, not just potential. Nothing new exists, except new ways of saying it—the future is a dream we apprehend as best our tiny mammal bodies can, the poetry precipitating out of Holographic All to shape and wag our tongues and typing fingers. And as we approach the Eschaton to recognize it as the Self we’ve been this whole time, categories like “new” and “familiar” explode beneath the weight of our original experience, the only thing that ever was, as it unweaves and weaves us and our grand predictions.

So, in short: in some sense it is hard to be completely wrong about the future, if you say, “This thing will be remembered and repeated in some way.” A universe in which all possibilities occur is more entropic, thus more likely. And that makes the only certain thing that we can say about the future, that it is. (And also isn’t.)